AOD-9604 is a modified form of amino acids 176-191 of the GH polypeptide. The human growth hormone (hGH) has fat loss properties making it a potential candidate to treat obesity. AOD 9604 is a peptide fragment of the C-terminus of hGH (Tyr-hGH177-191), which harbors the fat reducing activity of hGH, without its negative effects. Investigators at Monash University discovered that the fat-reducing effects of GH appear to be controlled by a small region near one end of the GH molecule. This region, which consists of amino acids 176-191, is less than 10% of the total size of the GH molecule and appears to have no effect on growth or insulin resistance.

Animal experiments confirmed the fat reducing potential of AOD9604, which seems to act directly on fat metabolism without influencing appetite. In genetically obese strains of rats and mice, AOD9604 was shown to affect body weight reduction, stimulation of lipoly-sis and inhibition of lipogenesis. Adverse effects, as seen in similar studies using intact hGH, were not observed with AOD9604 supplementation.

It works by mimicking the way natural Growth Hormone regulates fat metabolism but without the adverse effects on blood sugar or growth that is seen with unmodified Growth Hormone. Like Growth Hormone, AOD 9604 stimulates lipolysis (the breakdown or destruction of fat) and inhibits lipogenesis
(the transformation of nonfat food materials into body fat) both in laboratory testing and in animals and
humans.

Recent findings have shown, in addition to its fat loss properties, AOD 9604 processes many other regenerative properties associated with growth hormone. Currently research trials are underway to show the application of AOD 9604 in osteoarthritis, hypercholesterolemia, bone and cartilage repair. AOD 9604 has an excellent safety profile, recently obtaining Human GRAS status in the USA.

Lyophilized AOD9604 is stable at room temperature for 90 days. However, it should be stored in a freezer below -8C for any extended period of time

AOD 9604 had no effect on serum IGF-1 levels, which confirms the hypothesis that AOD 9604 does not act via IGF-1. Results of oral glucose tolerance test demonstrated that, in contrast with hGH, AOD 9604 has no negative effects on carbohydrate metabolism. There were no anti-AOD 9604 antibodies detected in any of the patients selected for antibody assay. In none of the studies did a withdrawal or serious adverse event occur related to intake of AOD 9604. AOD9604 displayed a very good safety and tolerability profile indistinguishable from placebo. AOD9604 did not result in any of the adverse effects associated with full-length hGH treatment. 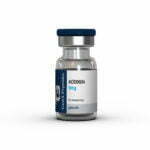